Setting Foot in Frankfurt am Main

Frankfurt by bus! My foot! Actually, Frankfurt on foot by frankfurtonfoot.com was a great experience. It gave me a deep whiff of the 248 square kilometres of Frankfurt in the 7 kilometres walk spread over nearly 5 hours. It was a Saturday. It appeared that 25% of the city's 700,000 population was shopping at Kleinmarkthalle - one of the local city markets which we passed through.

Our guide, Dave, started on the dot at 10.30 am to the peals of one of the Church bells in the Römer area from where the trip commenced.Fortunately, the bells of this church, he said, were not melted down to make bullets during World War II. The commentary was sombre, initially, as Dave told us about the night of the 22nd March 1945 when Frankfurt was bombed by the Allied Forces - which killed 1,000 inhabitants and destroyed the old part of Frankfurt. He pointed out to the only house (other than the Church to whose bells we started walking) which survived the bombing that night. We also were given to understand that this house is still occupied (not by the Allies) uninterruptedly since then by its owners. Dave was energetic, entertaining and enthusiastic - throughout. He's also American! Oops! Of course, he spilled the beans himself. He doesn't just trust the city to keep you engaged. He uses a mix of the city sights, light banter, witticism, wisecracks, flippancy and levity to keep the walkers engaged. 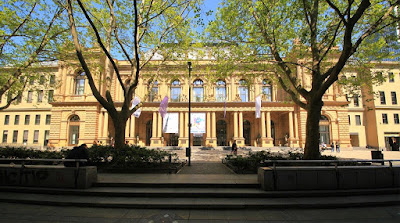 Dave walks his talk. You need to scamper to keep up with his walk. But it's his talk that poses more difficulty. To truly appreciate what he says, you need to understand American Army lingo, Korean humour (if there is anything to that description), internet connectivity in Australia, divorce laws (not sure if he was referring to the American or German law), a mixture of American and German accent and know what social media was before the advent of Facebook. He extolled on the greatness of Johann Wolfgang von Goethe who he referred to as the German Shakespeare. It was only then it dawned on me that it's not Go-thae but 'girth-ah'. I had got it wrong for many decades.

Frankfurt is one of the few cities in Germany with a skyline - so Dave proudly pointed out the Commerzbank Tower and the Main (after the river Main - pronounced Mine) Tower - not quite the Burj Khalifa. I was not there to see the skyline but the traditional half-timber houses - of which sadly only one is left in Frankfurt. The tour took us through Goethestraße, the luxury goods street and the Frankfurt Stock Exchange. We passed via Freßgass - a pedestrian only street - which is no big deal as all of Germany is pedestrian friendly. Of yes, he talked about a walking tour law in Germany which requires guides to cover two hills in the itinerary. So Dave took us over two half degrees gradient structures twice so as not to break the law (I did refer to Dave's levity earlier!). At the old Parliament, he also talked about how John F. Kennedy gave a speech here when the said "“Ich bin ein Berliner means ‘I am a Berliner’. Someone, 20 years later, interpreted this to also mean "“I am a jelly-filled doughnut”

Five hours and 7 kilometres later I had a good whiff of Frankfurt. I continued alone for another 5 kilometres before I realised that the battery on my phone powering the online map would give away much before my energy level sagged. I enjoyed it and look to a larger piece of the pie the next time. If you are there don't miss it. I hope you get Dave as your guide - not Jim as Dave just does not recommend Jim!
at May 15, 2017 No comments: 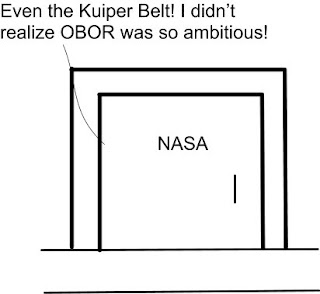 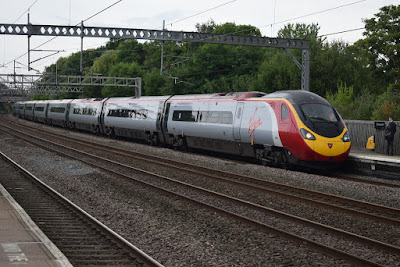